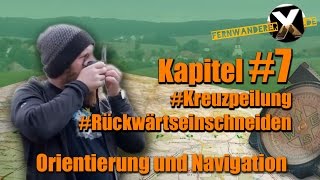 For orientation with map and compass, it is necessary to know the location. If we do not do this there is the method of Kreuzpeilung.Mit the cross bearing locations we our own point of view in order to orient us back on the map.

Since we do not we need our position to know us looking striking points (At least two pieces) and match it with the card, the easiest way is to individually protruding from the landscape objects. This would be such. As radio masts, wind turbines, windmills, lighthouses, Peak churches, etc., but should also be noted that this also marked on our map, we sind.Wenn have a Striking point in the landscape identified, we look for this on our card if we suspect this to have found on the map we look for a second prominent point in the landscape, but this should not stand next to the first object but a distance away! As soon as we have about identified both points, we can begin to map work! Now it is the first to target point with the compass. To do this we set our compass with Peilschlitz and visor wire as with iron sights, the Striking point and make sure that we keep it level as possible! Through the lens we could by pointing by reading the degree number on the compass rose below the Peilrichtungsstrich , If this is done we remember the degree number we’ve taken and turn to the map. We place our north bounded map best to the ground (preferably horizontal) and look for the newly targeted point. Now we place the compass on the map important sit while we put the compass in the same direction on the card as he was also aligned with the aim for!

(This line drawn is then a “leased line”)

the same we do Gnau also with our second Striking point. The striking feature object again aim for with “iron sights” that read grade numbers, create the compass again at this point and the compass turn until the degree number equal to the bearing line is, we mark this line again with a dash. now the two solid lines intersect and we have identified our location! If you now still uncertain since if this is the exact point can you also / draw n third and fourth position / status line. There then arises a triangle and you have just limited in this triangle your point.